There is value in standardized testing 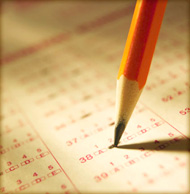 A growing number of parents and caregivers – including some teachers, school administrators and state legislators – will instruct their children to refuse to participate in the battery of standardized tests administered in schools across the country this spring.

Depending who you talk to, standardized testing is either a useful measure of student growth or it’s a drain on classroom instructional time, an example of government overreach, commercial indoctrination and an emotional bully to children. For them, taking the tests is a passive acceptance of everything wrong with public education, especially the demonized Common Core Learning Standards.

But hold on a minute. While we do support any parent’s right to make this choice, we argue that the decision should be thoughtful and informed. And, despite the controversy, there are some compelling reasons why your child should participate in standardized testing.

Standardized tests are administered annually in grades 3-8 in English language arts and math, and at least once in grades 10-12. Testing takes several days, not including any preparation time in the weeks preceding the test dates. Standardized testing is a national mandate, thanks to the No Child Left Behind Act (NCLB) of 2002*. (A reauthorization of this legislation is being debated now in Congress.)

Standardized tests are part of the educational program in public schools, and aim to serve at least one important purpose that benefits students. An objective assessment of all students at a particular grade level is one measuring stick – even if a flawed one – of where each student’s achievement compares to the New York State Learning Standards.

It is common to hear, “My child does all his work in school and gets straight As. He does the homework he is assigned, and we help him study. We know he is doing well, but when the scores from these standardized tests arrive, he is barely on the middle ground. It frustrates me and makes him feel like he has failed.”

This student hasn’t failed, but without standardized testing, there is no way to compare him with students in other schools and other locations, or against any objective measure of achievement. Without a way of measuring that, we have failed him.

In this example, this child is doing well with what he is asked to do, relative to his classmates. His report card celebrates that with straight As. However, suppose the students in his classroom are far from performing up to the standards expected for their grade level. The As don’t reflect that. Standardized test scores shine a light on the gaps that exist, and are intended to help teachers know where they need to adjust their instruction to narrow the gap for a child.

Testing, any testing, is meant to tell the truth about the gap that exists between what we know and what we should know to move to the next grade, be accepted in a college or vocational school, get a license, or earn a promotion at work. Ideally, a test should be an accurate measure of where we stand.

Problems do exist in the process. But, while the tests themselves are being refined, is it OK for students to sit them out? When is the truth revealed for them? Is it when they can’t get a job or be accepted to college for lack of skills? Is it when they realize after decades of work that they have been underemployed and never lived up to their potential and true ability because of an inadequate educational foundation?

Education law specifically points out that parents have primary responsibility for the education of their children (Title 20, Education, Chapter 48, U.S. Code § 3401), and their decisions made for their children should be respected. No one disputes that, including the right of parents and students to refuse to take standardized tests.

However, we need to regain trust in measurement (testing) as a tool for teachers and to help make instruction better. There may be a lot to fix, but opting children out of the process doesn’t advance their learning in the few short years they have to prepare for adult life.

When we parents send our children to public school, we are agreeing to participate in an educational collaboration, including the assessments used to measure progress in the instructional program.

We need the tests, both schools and parents. And the tests need to be difficult, clearly reflecting what our children should know and be able to do at their particular grade level.

We respect parents who care about education, especially those willing to work to see improvement that provides the quality education all children in the state are promised. We respect parents’ right to make decisions about their child’s education.

We don’t think test refusal is the best answer for your child’s education right now.

We think that energy can be better redirected toward advocating for more detailed test results that are shared with the teacher and parent in order to modify lessons and at-home support to better build up a child’s academic skills.

We believe that tests intended to provide data to improve instruction should be used that way, and not as ammunition to judge schools and teachers.

We support ideas that could reform the testing process, reducing the incentives to prep and cheat, and put the emphasis back where it belongs, on helping students master the skills they need to succeed.