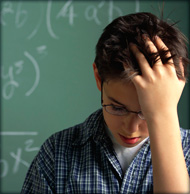 Many future high school dropouts can be identified by sixth grade.

Some of the clearest predictors of eventual dropout are frequent absences, being disengaged from and disliking school, misbehavior and being held back a grade in middle school.

The good news: There is still plenty of opportunity to turn things around and get an at-risk middle-school student on the right track toward graduation.

These kids can’t do it alone, though. At-risk kids need parents who are engaged in their education, who set the bar high and who encourage them, even when the going gets tough.

Students also should have a stake in their school, whether through special programs, clubs or athletics. It creates a bond that makes them want to be there, feel safe and have a vision they are shooting for.

“In spite of teenagers seeking independence from their parents, those whose parents are continually involved are more likely to be successful,” said Heidi Green, director of counseling services at Fayetteville-Manlius High School.

Green encourages parents to participate in school-related groups such as sports boosters, music programs and parent organizations. “Parents need to work hard to stay connected to their children and their education in spite of being nudged away by their children. A school counselor is often the best place to start,” Green said.

Terry LaFountain, who spent several years as a high school guidance counselor in Broadalbin-Perth Central School District, said dinnertime conversations are a great way to engage kids about school, which communicates to them that their “job” at school is as important as their parents’ jobs.

She also suggested that middle school parents get involved by reading the same books that their children are reading in school.

“It continues to establish the importance of reading and reinforce that you as a parent value the skills necessary to be successful in school,” she said.

Schenectady City School District Superintendent Laurence T. Spring emphasized the difference between parental involvement and parental engagement. Parents should volunteer not just for the bake sales, but to help kids with reading and math, Spring said, adding that his district provides training for parents on how to work with students in the classroom.

“Parental engagement is when the parents are working toward the mission of the school – developing literate children who are going to be quality citizens and who are ready for a career,” Spring said.

Spring said despite his district’s size – about 10,000 – staff members work hard to establish relationships with students, focusing on making sure each has a connection with an adult in their school. “Kids need to have an adult at school who will miss them when they aren’t there and like them even when they mess up.”

School officials agree that low expectations oftentimes yield poor results. “Kids will aim for the bar you set for them,” says LaFountain.

The 2006 study reported that 69 percent of dropouts said adults did not expect them to perform well and that those low expectations contributed to their decision to drop out. Most participants in the 2006 survey of high school dropouts said that expectations to complete homework were very low, and 26 percent said they completed no homework.

“Parents should ask questions about homework, such as, ‘was the homework hard?’ or ‘were you able to figure it all out?’ ” LaFountain said.

Parents should set the expectation that homework should be completed every night. However, rather than focus on the routine, step back to determine what method works. Perhaps working for a few minutes at a time is better than doing it all in one chunk.

Dropouts interviewed for the study generally said that higher expectations from parents and teachers would have increased their likelihood of graduating. In fact, 66 percent claimed they would have worked harder in high school if more had been asked of them.

Research shows a strong relationship between sixth-grade attendance and the percentage of students graduating on time or within a year of their expected high school graduation.

Batty says he made it his mission to attack Gloversville’s truancy issue during five years he worked at the high school.

It turned out to be more difficult than he thought, because it meant finding out why each student wasn’t coming to school. “It’s not a group approach; you have to drill down to every individual,” he said.

He said he kept a list of students he would call and wake up each school morning to ensure they would get up for school.

What he’s found: Punishment is not a good option for kids who keep skipping school. Instead, Batty said he would rather sit down with students and their parents to figure out why they aren’t coming to school.

If students are trying to avoid school, Batty suggested parents should try to get at the heart of the reason. Perhaps the student is being bullied. Or maybe the student is frustrated because he can’t see the board. “It can be as simple as realizing that they need eyeglasses,” Batty said.

Even mild misbehavior that continues over time seems to have an independent effect on graduation odds.

Not paying attention in class, acting out and not getting along with teachers are red flags that a student is disengaged from school. Schenectady’s Laurence T. Spring says kids may mask their struggles in a subject by acting out. “Kids misbehave when they are unsuccessful. They might rather get kicked out of class than have people find out that they can’t read simple text.”

Being held back is another factor in dropout rates. The National High School Center recently reported that 63 percent of students who stayed back in middle school didn’t end up graduating.

Batty said he doesn’t think retention is the answer and that it does more harm than good. “Being held back increases disassociation with their peers and creates low self-esteem,” he said.

Spring agreed, calling retention the “most extreme intervention.” All other options should be exhausted first, including parents and teachers working together to develop a recovery plan for the student.

Give them a path to graduation and beyond

Middle school is not too early to start helping students figure out how their interests can lead to a career.

Parents can initiate conversations with their middle-schoolers to see where their interests lie and introduce them to careers that correlate with those interests.

Batty said students are often recognized by their graduation year, so they can orient themselves that way. “Our guidance counselors help students at this level begin to explore career goals and build a plan so they know what they need to get there. Everything is geared toward keeping them on track for graduation,” he said.