What will Phil say? 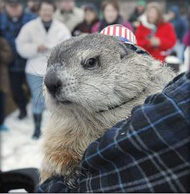 Thousands will gather in Gobbler’s Knob, Punxsutawney, Pennsylvania, on Feb. 2, Groundhog Day, to watch as the world’s most famous weather wizard makes his annual prediction. As he emerges from his burrow, television stations around the world will broadcast his movements.

According to tradition, after Phil emerges from his burrow on Feb. 2, he speaks to the Groundhog Club President in “groundhog-ese.” The president then translates the proclamation for the world.

If Phil sees his shadow, it’s a sign of six more weeks of bad weather. If not, we can expect an early spring.

Groundhog Day has its origins in the ancient Christian tradition of Candlemas Day, a day on which clergy would bless and hand out candles needed for winter. The candles symbolized how long and cold the winter would be. Germans expanded this tradition by choosing an animal, the hedgehog, to predict weather. The tradition was carried to America, and German settlers changed the animal to the groundhog when they made their homes in Pennsylvania.

Punxsutawney Phil has been predicting the weather for decades. Groundhog Day in the United States dates back to the late 1800s, with the first official trek to Gobbler’s Knob documented on Feb. 2, 1887.

Phil’s supporters claim he’s accurate 75 to 90 percent of the time, but some weather experts claim Punxsutawney Phil is no meteorologic mystic. According to the StormFax Weather Almanac and records kept since 1887, Punxsutawney Phil’s weather predictions have been correct 39 percent of the time. The National Climatic Data Center, previously known as the National Weather Records Center (NWRC), in Asheville, N.C., has described the forecasts as “on average, inaccurate” and stated that “[t]he groundhog has shown no talent for predicting the arrival of spring, especially in recent years.”