Lessons from the Pilgrims

On a day when so many families gather, Thanksgiving is the perfect chance to make learning a fun, family experience.

The holiday is steeped in tradition, particularly regarding the story of the first Thanksgiving at Plymouth Colony. If you and your children aren’t familiar with the history of the Pilgrims’ first winter in America, reading the story together can be fun. Margaret Pumphrey’s Pilgrim Stories is a long-time favorite. Now in the public domain, it can be read online here.

Once acquainted with the Pilgrims, you and your children could talk about their perseverance, how they never gave up in the face of very difficult circumstances. Even after a long winter where many died, none of the Pilgrims chose to return to England the following year when the opportunity arose.

Although the future held trouble for relationships between later Puritan immigrants and the native people, the Pilgrims at Plymouth went to great lengths to develop friendships and trading partnerships with the tribes living in the area. They spent a year seeking out the rightful owner of a stash of corn discovered on Cape Cod shortly after the Mayflower landed, and made full payment for the food they took.

Massasoit, a leader of the Wampanoag, and Tisquantum (better known as Squanto), came to the Pilgrims and offered invaluable help. Without the assistance of the native people, the Pilgrims may not have survived their first year in America.

The Pilgrims and native people were fascinated by each other, and this offers a good lesson on how people, although very different, can get along with each other.

One thing the Pilgrims insisted on from their community members was a written accounting of family trees and possessions. Today, thousands of people trace their heritage back to the families that sailed on the Mayflower.

Gathering together this Thanksgiving provides a chance to share stories of our own personal past, letting children hear firsthand what it was like when parents and grandparents were children. And the holiday gives families a chance to pass along a spirit of thankfulness to their children for the good people, events and things in our lives and the greater world around us.

Nine Men’s Morris is a game that Pilgrim children liked to play. You may want to give it a try this Thanksgiving after the turkey is put away.

You will need two sets of nine playing pieces (peas, beans, pennies, dimes, rocks, stones) and the playing board. Draw the board design shown here, or download the graphic at the bottom of the page. 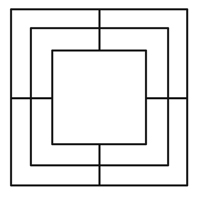 The object is to arrange three pieces in a row, allowing you to take away one of the opponent’s pieces. Each player has nine men. The players take turns putting their pieces (one at a time) on the board at places where lines meet. Each player tries to get three of his pieces in a row while preventing his opponent from doing the same.

When a player gets three pieces in a row, he may then take one of his opponent’s men off the board.

After both players have put all of their pieces on the board, pieces are moved (one piece per turn) by sliding it from its space to an empty neighboring space. Every time a player arranges three pieces in a row, he takes one piece from his opponent. When a player has only three pieces left, then he can move to any empty space on the board. The game is over when one player is left with only two pieces.

The Pilgrim Hall Museum in Plymouth, Mass., has an extensive collection of historical information about the Pilgrims and the community they founded in America. Visit online at PilgrimHall.org

Think your family may be descendents of Mayflower Pilgrims. The Mayflower Society is one of many organizations that document family trees going back to the original Pilgrims. TheMayflowerSociety.com

Tom Antis has been a communications specialist with the Capital Region BOCES Communications Service since January 2008. His career includes stops in advertising, marketing, graphic design and illustration. Career highlights include the first manned rocket launch from his neighborhood playground, an award-winning parade float design, and one day working for the circus. For the last 11 years, Tom has been building bridges in public education, using his design and writing skills to help schools manage change and communicate their mission. He and his wife Julie home school their two youngest children. A third son is an active duty soldier in the U.S. Army.