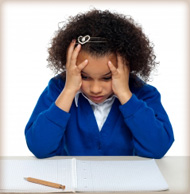 The release of student test scores has added fuel to the arguments of an increasing number of parents disturbed by the effects new Common Core Learning Standards and standardized tests are having on their children.

Some say their children are coming home from school stressed and frustrated about difficult schoolwork and demoralized by lower-than-expected state test results. Parents are worried – rightfully – about their children’s self-esteem; they argue that their students’ love of learning is taking a beating.

There’s no doubt there are strong feelings being voiced about Common Core. Yet, as parents, our immediate concern is how we help our children deal with the stress they might be feeling as they navigate this educational sea change.

Whether or not you agree with the new standards or state testing, it is the reality our children are facing right now. Telling our children the system is wrong is not going to help them on Tuesday’s math test. And, quite honestly, our children should not become pawns in the debate about Common Core policy. They have no place in carrying the political message or in dealing with the fallout.

So how can we help children navigate smoothly through today’s turbulent changes in education?

If your child expresses frustration and distress, be open to what he/she is saying. Listen attentively and calmly, with interest, patience and caring. Avoid any urge to judge, blame, lecture or say what you think about your child’s reaction to the situation or the system as a whole. If there are tears, try to figure out if they are truly tears of frustration or if they are “if I cry enough, mom/dad will give me the answers” tears.

Communicate with the teacher.

The fact that you can complete a 5th grade English Language Arts assignment is admirable, but is your child able to write a few paragraphs comparing two pieces of literature and identify its theme? If a teacher doesn’t know that the student does not understand the work, the teacher cannot provide support or adapt the lesson to meet the child’s needs. If your child has put effort into homework and cannot understand it, send the teacher a polite note. It is up to the teacher to adjust his/her teaching and help your child understand. Trust that the teacher knows how to do his/her job.

This doesn’t look like the way we learned math. While it can be frustrating when we are not able to help our children, to show them “how we used to do it” may add confusion to what the teacher is trying to teach. This is where we need to step back and let our children do the work. Rather than saying, “This is too hard, you can’t do this,” we should say, “You can do it!”

Be wary of the standard, “I don’t get it,” which can be an easy out for children to simply quit. “Children are learning to break problems down into parts, and thus they must learn to identify the part they don’t understand,” said Nancy Ingersoll, a 4th grade teacher in Burnt Hills-Ballston Lake School District who has taught at the elementary level for 28 years. “Celebrate the correct steps they are taking and commend them for their grit and determination to not give up.” If a child continues to be frustrated, seek more help from the teacher.

If a child has been working for an hour on 3rd grade math homework, it’s time to set it aside. The National Education Association endorses 10-20 minutes per night in the first grade and an additional 10 minutes per grade level thereafter (e.g., 20 minutes for second grade, 120 minutes for 12th, though time for the upper grades can vary depending on course selections). If your child is spending more time than recommended, it’s probably counterproductive and time to write that polite note to the teacher.

Parents can’t solve every problem as kids go through life, but by teaching healthy coping strategies, we are preparing our children to manage the stresses that will come in the future. “A child has to take responsibility,” said Ingersoll. “If we give children the control of their own destiny and they succeed, think of how they will feel. Pride and confidence grow from achieving success on their own. So much of it is attitude and how they approach it.”

If students focus only on the destination (i.e., test score), they will not appreciate the journey they took to get there. Rather than focus on a number, praise the effort they have put into their studies. Ask “what did you learn today?” instead of “how did you do on your science test?” It’s also important to make sure a child is putting forth their best effort, and working at their highest level. “Students should recognize that successful work takes time, effort and diligence,” said Ingersoll.

Resist the urge to compare.

We have heard for months that you cannot compare last year’s state standardized test scores to this year’s, but it’s human nature to do so. The fact that the numbers look the same – with a grading scale of 1-4 – doesn’t help. According to State Education Commissioner John King, the new tests were far more difficult, and based on far tougher standards and expectations of students, than tests given in previous years. King’s message: It’s not that students learned less or teachers taught less, it’s that the tests were much harder.

“This year’s scores are based on a completely different standard than in the past, as New York state attempts to align to a national standard,” said Robert Mark, director of elementary instruction and federal programs in Greater Amsterdam School District. “Parents who want to learn more about how their child is progressing will get the most current and accurate information by speaking with those teachers who are working with their child every day.”

We are better able to handle life’s challenges when we are not overtired. Sleep is important for our children, too. Take time away from homework to exercise, have a meal as a family, hang out with a friend or simply read a book for pleasure. Give the brain a break!

Be patient, and don’t fuel the fire.

Change is never easy, but understand that Common Core standards were not pulled out of thin air. Whether or not you agree with the intent and/or implementation of the standards, debating its value in front of your young child may do little more than intensify their stress. If your children view your Facebook page, maybe that’s not the best place to voice your discontent. Remember: Young children do not need to be drawn into the political debate.

What is called “scaffolding” is built into the curriculum, which means teachers are able to modify instruction to meet their students’ specific needs. “Curricular materials are designed to be adopted or adapted,” according to the website. “Lessons are adaptable and allow for teacher preference and flexibility so that what is happening in the classroom can both meet students’ needs and be in service to the shifts and the standards.” In other words, it’s not cookie-cutter.

If your community is hosting an event on the Common Core, be present. Read information regarding what the Common Core is about. Misunderstanding can fuel some of the frustration, so be sure to check out the facts at engageny.org.

A LITTLE MORE ON COMMON CORE

Parents opposed to the new system – and some teachers, for that matter – have taken to social media to voice their concern and outrage. One example is a blog post that went viral, featuring an open letter to the New York State Education Department and Commissioner John King).

The Common Core State Standards (CCSS) is a framework for curriculum adopted by 45 states and the District of Columbia in 2010. CCSS redefines what should be taught in schools – and when – in the United States, with the ultimate goal of ensuring students are career and college ready by the time they graduate from high school.

The intent of the standards is embraced by many. New York State Parent Teachers Association (NYSPTA) says it this way in a blog post entitled, “Finding Common Ground”: “Many educators, administrators, business leaders and parents recognize both the need for and the value of higher learning standards. These higher standards are intended to give every child the opportunity to meet the demands of a rapidly changing, highly mobile and technical society. The goal is both necessary and laudable.”

However, the implementation of Common Core – including the assessment piece (i.e., standardized state tests) – has drawn sharp criticism from parents and educators alike. Calls for the state to address what are seen as flaws in the system are growing louder.

Some would argue that 3rd graders don’t need to prepare for college. Others would counter that the foundation being built as a result of the new standards will better prepare young children for the rigors of middle school and high school.

There’s no doubt that what and how students are learning is undergoing a significant transformation. Take 4th grade math, for example. Common Core curriculum asks a student to understand why 12 times 3 equals 36 rather than simply accept the answer as true because it appears on a flashcard. Students are thinking more critically, rather than memorizing facts. It’s about problem-solving.

Ingersoll said she understands the thinking behind Common Core instruction more in year two. She has seen a difference in how her 4th graders approach math since the start of the school year.

“The Common Core approach asks them to dig a little deeper,” said Ingersoll. “They really understand numbers better, and they start to understand relationships between numbers better. It does look different from what we have done in the past, but it’s very much within their level of ability to get the job done.”

Karen Nerney has been a communications specialist with the Capital Region BOCES Communications Service since 2011. Prior to that, she spent many years as a journalist in the Boston area. She is mom to two daughters, ages 17 and 15, and a 9-year-old son.

Image courtesy of stockimages at FreeDigitalPhotos.net