Pause to honor the meaning of Memorial Day 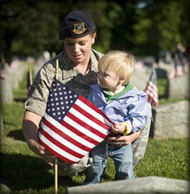 As the unofficial start to summer, Memorial Day brings up thoughts of barbecues, outdoor fun and, of course, a day off from school.

It’s also important to also acknowledge the meaning of the holiday and share with children the importance of honoring those men and women who have made the ultimate sacrifice to protect our country and preserve the freedoms we enjoy.

There are differences of opinion about when Memorial Day – originally called Decoration Day – started. While the practice of laying flowers on graves of the dead is centuries old, some researchers say Memorial Day has its roots in the South, where organized women’s groups began the laying flowers on the graves of fallen soldiers during the Civil War.

Other research indicates the holiday may have started in Charleston, S.C. Toward the end of the Civil War, the Washington Race Course in Charleston was used as a prisoner-of-war camp. Conditions were deplorable, and more than 250 Union soldiers who died in the camp were buried in a mass grave.

In 1966, President Lyndon Johnson declared Waterloo, N.Y., the official birthplace. He based this on the fact that in May 1866, residents of Waterloo hung their flags at half-mast and decorated their village to remember the soldiers who died during the Civil War.

Whatever the origins, we set aside the last Monday in May to honor those servicemen and servicewomen who have died while serving in the United States Armed Forces.

Here are some ideas to help your children acknowledge the holiday:

Fly the red, white and blue. Hang your flag at half-mast from sunrise until noon to honor the dead and symbolize our collective mourning. At noon, the flag is raised to full mast to honor living veterans. At 3 p.m. local time, the country pauses for a National Moment of Remembrance, established in 2000 by Congress and signed into law by then President Bill Clinton “to commemorate our history and honor the struggle to protect our freedoms.”

For flags that can’t be lowered, the American Legion suggests attaching a black ribbon or streamer to the top of the flag. The ribbon should be the same width as a stripe on the flag and the same length as the flag. For a wall-mounted flag, the American Legion suggests attaching three black mourning bows to the top edge of the flag, one at each corner and one in the center.

Visit veterans’ graves. You don’t have to have lost a loved one to visit a National Cemetery or memorial service. Take the opportunity to visit veterans’ graves, and bring flowers if you’d like. Explaining that men and women died while protecting others gives meaning to the holiday.

Notice the flags decorating veterans’ graves. That tradition began in 1868 when members of the Grand Army of the Republic adorned the graves of fallen soldiers at Arlington National Cemetery outside of Washington, D.C. Today, members of the 3rd U.S. Infantry Regiment (The Old Guard) place more than 220,000 flags annually on the graves in advance of Memorial Day. Veterans groups echo the honor by placing flags at nearly every community cemetery around the country.

Sent a letter to a solider. There are many organizations that prepare and organize care packages for soldiers stationed abroad. Check out Military.com. You can also send a letter to an active serviceman or woman. For tips to get you started, see A Million Thanks.

Take time this weekend to remember the men and women who selflessly gave their lives to protect our land.

Then, pull out a Frisbee, light the grill and celebrate your own family.