In a political season, students do the research, ask the questions, and hit the campaign trail!

Election Day may be Tuesday, Nov. 6, but students across the country have already started heading to the polls in mock elections after a season of learning about how presidential elections work.

Several online outlets, including the National Mock Election for Students and “Every Kid Votes” provide election resources for students and teachers and an online platform for students to cast their ballots. Students’ choice for president will be announced by both of those sites in the coming days.

Mock elections are just one way that American students are engaging in the 2012 political season. Parent Today surveyed a number of schools in New York, and found students interviewing local candidates, staging presidential election forums, and looking back at presidential campaign history.

In a post last week , I wrote about the line that parents tread between articulating and living out their political beliefs and allowing children to develop their own views. It’s great to see that schools are also taking the time to explore political issues with students at all grade levels.

At Jordan-Elbridge High School in the Syracuse area, Participation in Government students watched a series of old televised debate moments, including some infamous moments like Richard Nixon’s 1960 debate with John F. Kennedy and Michael Dukakis’ answer to a question about the death penalty in 1988. Students then watched some CNN analysis of this year’s debates and discussed their thoughts.

At Stillwater High School in Saratoga County, Participation in Government students had an opportunity to ask questions of both candidates for a local New York State Assembly seat on issues that mattered to them, such as the minimum wage and gas prices. Prior to the visits, students researched the candidates and their positions. They also held a “Meet the Press” spinoff where students “stood-in” for Barack Obama and Mitt Romney and answered questions from their classmates.

At Cohoes Middle School in the Albany area, students researched and designed campaign posters for the presidential candidates. The posters, which feature photos of the candidates and their beliefs and positions, will be on display until Election Day.

At Birchwood Elementary School in Niskayuna, students in grades three and four created a PowerPoint presentation about the electoral process and the candidates. Their presentation then hit the campaign trail, being used in every classroom in the school ahead of a mock election through “Every Kid Votes.”

The students even included an Electoral College explanation in their presentation.

“Sometimes it’s really not about the popular vote,” said Rohan a Birchwood fourth grade student who worked on the project. “It’s about the Electoral College. I think it should be a popular vote.”

I don’t remember this kind of in-depth exploration of the candidates, issues, and process when I was in school (which wasn’t all that long ago.) Sure, I remember some mock elections, and I do have a distinct memory of a “Weekly Reader” issue that profiled the 1988 Republican presidential candidates during the party’s nominating contest.

Then again, when I was a student, it wasn’t as easy to re-play a debate the very next day in class or immediately call up a clip of a candidate speaking. It’s a different world today. As a parent, I’m excited by the ability today’s teachers and students have to really engage in current event discussions with primary sources and substantial news coverage.

Is your child coming home from school talking about the election? Do you think it’s positive that our schools are devoting time to student exploration of political and policy issues? 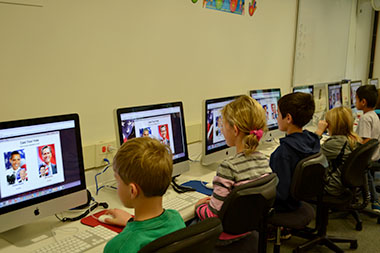 Students at Birchwood Elementary School in Niskayuna participated in a school-wide mock election, conducted online through the “Every Kid Votes” organization.

Matt Leon has been a communications specialist with the Capital Region BOCES Communications Service since March 2006, serving both urban and suburban school districts in that time. Prior to joining BOCES, he worked as a newspaper reporter; Matt has a master’s degree in journalism from Northwestern University’s Medill School of Journalism. He is a full-time husband and dad and a part-time political junkie. Matt’s daughter is three years old and his son is almost one. He has no free time.