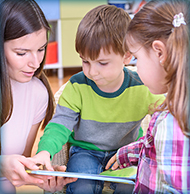 When my brother and sister-in-law learned that their daughter, Amelia, could start pre-kindergarten in September, they were elated. She was only 3 at the time, but very bright. I have the personal bias of a loving aunt, but when I was 3, I couldn’t count to 100, write my name, or tell a hexagon from an octagon.

But Amelia’s parents and I remembered how much we all loved school, and agreed that was what we all want for Amelia.

However, by the end of her first week at school, Amelia’s teacher reported that she was having “behavioral issues.”

The issues not only continued, they got worse. Amelia was sent to the principal’s office on a regular basis, she cried often, and she developed the habit of flinging herself on the floor in a tantrum when she was told to do something she didn’t want to do. It wasn’t long before she didn’t want to go back to school.

Her parents were puzzled about the cause of Amelia’s behavior. School officials decided to have Amelia evaluated to find an explanation, and to determine what could be done to help her.

This was a difficult situation for my brother and sister-in-law to grasp — the notion that their bright, sweet daughter may need extra help or special education services. It was especially difficult because we had not seen any of this behavior before; the signs went undetected until she began school.

Amelia underwent two evaluations. In addition to one conducted by the school staff, her parents were referred to a local psychologist who made several visits to their home. Throughout the process, Amelia’s parents met regularly with her teacher and school principal to ensure all the correct procedures were followed.

The evaluations revealed that Amelia needed speech therapy. Amelia may be on the far end of the autism spectrum, which includes symptoms associated with delays in communication skills. The psychologist believed she was acting out during school because she became extremely frustrated when she had trouble communicating. With early intervention, Amelia could grow out of the symptoms.

Today, Amelia’s communication skills have dramatically improved. Beyond her regular speech therapy, her speech teacher works with Amelia if she has difficulties in class. While she was initially apprehensive, scared and a little angry about the evaluation, Amelia’s mother now says it was the best thing that happened.

“Parents of young children have hopes and dreams for their child. When they are told their child has autism, or cerebral palsy, or whatever the case might be, their dreams may be dashed,” Burns said. “That period of time when their child is identified can be extremely difficult, especially for more significant disabilities.”

As hard as it may be to come to terms with these kinds of situations, it can be even harder to pick up the phone to call someone and ask for help. When facing the unknown, how do you even know whom to call?

“There are a lot of resources, but the problem is, if a parent is new to this system, it can be difficult to navigate and get connected with a program,” Burns said.

No matter the child’s age, if parents or caregivers suspect he or she may need extra help or special education services, it’s important not to delay an evaluation. Your child’s pediatrician can help you get started. Additional resources are noted below.

“There is no reason to wait if you’re worried about your child’s development,” Burns said. “What I say to parents when they do make that call is at least you can alleviate your fears or worries if you get the evaluation done. If results do come back saying your child needs special therapy, then you know and you can get the services your child needs.”

Burns said it helps to know there are different systems for each age group. She identified three resources parents can access in any community:

The Centers for Disease Control and Prevention (CDC) estimates that 1 in 68 children has been identified with an autism spectrum disorder and about 1 in 6 children aged 3–17 has a developmental disability. Many children with a developmental disability are not identified until after entering school, but early intervention (before school age) can have a significant impact on a child’s ability to learn new skills as well as reduce the need for costly interventions over time.

For parents who are just beginning to realize their children might need special help, Burns offers the following insight: “Making that first phone call or asking your child’s pediatrician can be difficult. Parents don’t want anything to be wrong with their children, but we know that the earlier a child gets identified, the chances for success and progress are greatly increased. Earlier identification means more access to services, and hopefully improved outcomes.”

Heather Nellis joined Capital Region BOCES as a communication specialist in September 2015. She spends much of her free time with her young nieces – Piper (1), Kennedy (2), and Amelia, who is now 4 years old and happily adjusting to pre-k.