They’ve been called master architects and engineers, but they’ve never spent a day in an actual classroom. Instead, they perfect their innate talent by watching and doing.

They’re beavers, an animal we became curious about when we noticed several trees down alongside a small pond near our house. They leave in their wake a telltale pointed stump and wood shavings on the ground. This particular beaver family has downed at least six trees so far, with another soon to follow. (See photo.)

Seeing the results of the beavers’ work reminded us how many educational opportunities there are in the natural world around us. We decided to learn more about beavers since it appears we will be neighbors, at least for this winter. 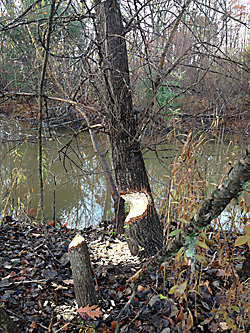 A quick Google search and we were able to view several videos and find out a few facts about our new furry friends. Beavers are North America’s largest rodent, and they mate for life. They’re nocturnal animals, meaning they do their work at night. It appears they’re building a lodge – a beaver dwelling – in the middle of the pond. They’ll use mud and sticks to create a secure shelter that has an underwater entrance so they can access other plant life underwater to eat during the winter (they’re vegetarians).

Beavers have webbed feet and are semi-aquatic. They move slowly on land but are good swimmers, aided by a wide, flat tail that acts as a rudder when they swim. They also use their tale to slap the water to warn others of danger.

Offspring typically live with mom and dad for two years before venturing off to start their own family. Aside from humans, they’re the only animal that can create dams and alter an environment.

The beavers are a perfect example of how nature can provide amazing lessons for young children. While beavers don’t limit their work to the fall months, there are signs of fall that you can point out to young children to help them learn about the natural world around them.

Be on the lookout to see what else is happening as nature prepares for winter.

Talk about trees. Some trees have leaves that turn color and fall off (deciduous), while others keep their “leaves,” better known as needles (evergreen). Look for different kinds and colors of leaves. For more activities, check out Autumn Trees and Leaves Teaching Ideas

Watch the squirrels at work. Squirrels gather up nuts and berries during the fall months and hoard them away for winter. In fact, a single grey squirrel can create several thousand buried caches of food each season, not all of which it can hope to rediscover. This is called scatter hoarding.

When its food stores gathered in the summer and fall starts to dwindle, the squirrel uses its sharp teeth to score the bark of maple trees, allowing sap to drain. The squirrel waits for the sunlight to dry up the sap’s water, then returns later to lick it – getting a much-needed sugar boost.

Environmentalist Rachel Carson, who is credited with founding the contemporary environmental movement in the earlier part of the 20th century, once said, “If a child is to keep alive his inborn sense of wonder, he needs the companionship of at least one adult who can share it, rediscovering with him the joy, excitement and mystery of the world we live in.”

Who better than a parent to help a child unlock nature’s mysteries?

Karen Nerney has been a communications specialist with Capital Region BOCES since 2011. Mom to two daughters, 18 and 16, and a son, 10, she recently added “night vision googles” to her Christmas wish list so she can see the beavers work in the dark.